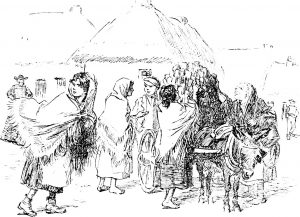 Thanks to the Claddagh Ring, the name Claddagh is known the world over. Named after the small fishing village in Galway, the history of Claddagh is a fascinating one.

One of the oldest fishing villages in Ireland, Claddagh is located just beyond the city and once housed many thatched cottages. The people from the Claddagh differed very much from their neighbours long ago as the village lay beyond the city walls. These proud people had their own distinct culture, and they even appointed their own king. Irish was their native tongue, whereas English was the first language of the townspeople. They never married outside of their own village. Their distinct separateness allowed them to preserve their customs and culture right up until the 1930s. Stephen Gwynn wrote the following account that seems to sum up the independence of the Claddagh people:

“…But a thing struck me which I have never seen elsewhere in Ireland, where generally men have a prejudice against handling babies or doing anything else that is taken to be women’s work.  But here, in at least a dozen houses, I found the woman bustling about while the man stood or sat with an infant on his arm – and holding it as a woman does…I have never found any other community in Ireland so alien, so shy, and so hard to know.”

The Claddagh people dressed similar to country women at that time with bright petticoats, cloaks, and heavy shawls.  They also had distinct dark hair and skin, compared to their fairer neighbours. 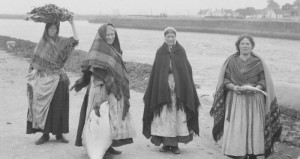 The men from Claddagh were predominantly fishermen and fished on traditional boats known as Galway hookers. These boats have become a symbol of Galway with their distinct maroon sails. The women would then sell their catch at the fish market, located in the Spanish Arch. The women were also great crafts people, making nets and lace.

Sadly, the old Claddagh village as it was known came to an end. Fishing trawlers saw the end of the local fishing trade and many fishermen left in search of a better life. Many joined the British Navy and perished in WW1. 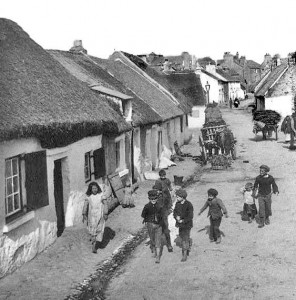 The last of the traditional Claddagh cottages were demolished in the 30s after a deadly outbreak of  tuberculosis. The cottages were deemed unsanitary and demolished, soon to be replaced by council houses by the dismay of Claddagh people. Very little remains of the original village, and yet, it’s culture and influence remain strong. The rising popularity of the Claddagh Ring has sparked interest in the history of the village in recent times, and for good reason. This unique village was something truly special and is deserving of reminiscence and celebration.