The Blake tribe were one of the wealthiest and most powerful of the tribe families in Galway. They were of British descent and were thought to arrived in Ireland with Strongbow.

Along the Corrib, you will see castle ruins covered in ivy. This castle once housed one of the wealthiest tribes of Galway. The Blakes occupied the house from the 1600’s to 1910.

The castle was an important building in Galways history.  ‘Maying in Menlo’ was a great sporting event held at the grounds that drew people from all around for fun and festivities. 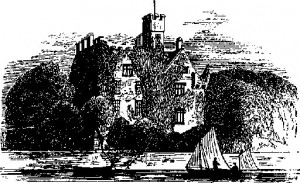 It was a dark day in 1910 when the castle was destroyed in a great fire. It is unknown how the fire started but it resulted in the death of two servant girls and the Blakes daughter Eleanor. The fire was so fierce, leaving little left but its four walls.

The ruins are now a reminder of  the great wealth of the Blake tribe and also a great tragedy and loss in Galway’s history.