The Lynch tribe may be the most well known tribe family. Lynch’s castle is a prominent stone building in Galway city. Built in limestone, the building has elaborate stone work, including their coat of arms. A sign of the wealth of the Lynchs at that time. 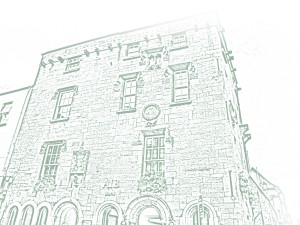 Many Mayors of Galway were Lynch’s, including the infamous Mayor James Lynch FitzStephen who allegedly hanged his own son for the murder of a Spaniard at the window of his home. The term “lynching” supposedly came about from this event. You can visit  Lynch’s Memorial Window where you will see skull and bones carved into the stone.