The O’Flaherties once ruled the land until they were banished to the wilderness of Connemara by the Anglo Normans. The tribes feared the O’Flaherties and built a wall around the city with a the following inscribed upon it:

“From the Ferocious O Flaherty’s O Lord deliver us”.

The O’Flaherties were responsible for “the massacre at Shrule” where many of English Protestants were murdered. This event was thought to be the trigger for the reconquest of Ireland by the British. They were also thought to be responsible for massacring all but one attendee at a wedding at Renvyle Castle – abode of the Joyce clan. It was incidents like this that most likely gave them their fearsome reputation.

The family motto was Fortuna Favet Fortibus, or “Fortune Favours the Brave.” 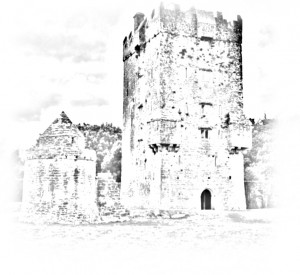 Perhaps the most renowned member of the O’Flaherty clan was Grace O Malley who married Donal O’Flaherty. After the death of Donal, O Malley inherited his ships and became a feared pirate queen.

Oscar Wilde is a descendant of the O’Flaherties.

Today we can thank the ferocious O’Flaherties for the preservation of our Gaelic heritage. If it hadn’t been for their fighting spirit, we may have lost our Gaelic roots long ago.