The Vikings In Ireland 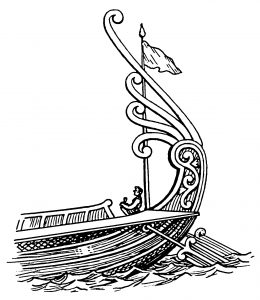 The Viking invasion in Ireland marked a profound era in Irish history, one that is still visible in Ireland today. The Vikings came from Scandinavia in search of land, slaves and treasures. They were known as Norsemen. How fearsome these strangers must have seemed to unsuspecting people of Ireland. The Viking era in Ireland is classed by two distinct invasions. The first came in around 795 AD. They hit settlements quickly, took what they could and returned home to sell their treasures, leaving a trail of destruction and fear behind them. Their attacks were infrequent at first but became more forceful and organised as time went on. Many Christian monasteries were plundered and destroyed and the Vikings were brutal in their treatment of those who got in their way. They eventually made settlements and using them as a base they carried out more extensive attacks to inland towns using a distribution of rivers. The first known settlements were Duiblinn – now known as Dublin, and Anngassan in what we know as Louth. The second wave of Vikings came to Ireland around 851 AD. These Vikings were mostly Danes, and they slaughtered the Norse Vikings. They enforced their rule over Ireland but this eventually led to them being driven out of of Ireland. Some  remained settled and mixed with the Irish. This was not the end of the violence however. Many acts of warfare continued between the High Kings of Ireland and the settled Vikings eventually leading to the great Battle of Clontarf when Brian Boru defeated the Viking army. The Vikings had a huge impact on the culture in Ireland. Before the Vikings came to Ireland there were no towns as such, but rather settlements around monasteries. The Viking settlements eventually evolved into towns and became important trading ports. The Viking revived Celtic art just when it began to decline. There was a fusion in styles which can be seen in stone and metal carvings. Many Viking surnames are still in existence today and there are even some Norse words used in the Irish language. 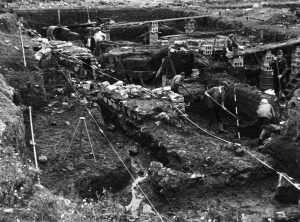 One of Ireland biggest protests took place in Wood Quay Dublin in 1978 to save a major Viking settlement from being built upon by Dublin Corporation. Over 20,000 people took to the streets to save a big part of our heritage. The protest was unsuccessful but it did buy some time to do some valuable excavation of the area.

The site revealed something of a time capsule when remains of over 100 houses and thousands of perfectly preserved artifacts including swords, pottery, jewellery, combs and a fully intact Viking skeleton.